China’s next social trend: paying celebrities to answer your questions

I know who Chinese internet celebrity Papi Jiang‘s favorite Game of Thrones character is. That’s completely useless information, of course. But now that I’ve mentioned, you’re a little curious, aren’t you? That, I think, is the basic principle on which Fenda was founded.

Fenda launched less than a month ago, but it has already blown up thanks to famed investor Wang Sicong answering a bunch of user questions, including questions about his sex life, for increasing exoribitant sums of money. It has attracted a bunch of other celebrities, from the aforementioned Papi Jiang to real movie stars like Zhang Ziyi to famed sexologist Li Yinhe. There are also plenty of regular, not-so-famous users on there.

For most users, the fun of the platform is in listening to what others ask and answer.

Pricing is set by the user answering the question, so it varies according to how famous that person is. So asking a question of Li Yinhe, who may have a more niche academic following, will cost you US$43, but asking Zhang Ziyi a question costs almost US$500.

For most users, though, the fun of the platform is in listening to what others ask and answer. Questions and answers are publically available, although it costs US$0.15 to listen to an answer, so you don’t have to pay to much to hear Zhang Ziyi’s voice-recorded answers to other people’s questions. And that might seem like kind of a silly gimmick, but if even if you’re not a celebrity fiend, there’s something fun and intimate about hearing famous people answer the questions of regular people in their own voices. It’s like you’re getting a little snippet of a WeChat conversation with your favorite movie star. 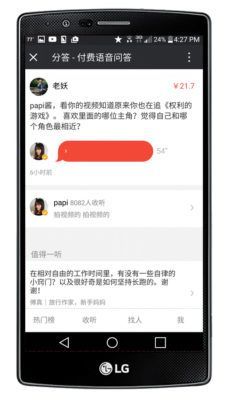 Papi Jiang answers the Game of Thrones question on Fenda.

Of course, it’s not all movie stars, though. There are all kinds of people, including famous teachers and investors, already on Fenda, and for every silly question like “Who’s your favorite Game of Thrones character, Papi Jiang?” (it’s Tyrion, by the way) there’s also a question for a more serious user about how to do well on the GRE or what stocks to invest in this summer. And the whole thing is really quite active for a platform that was only launched a couple of weeks ago.

It might sound like Fenda is eating Zhihu’s lunch, and that could be true. Zhihu is China’s biggest Q&A platform, but in its original form it’s a text-only site that’s more like Quora than Fenda. But interestingly, just before Fenda went live, Zhihu launched a new feature of its own called Zhihu Live that also lets users pay to ask questions of celebrities.

Zhihu Live works differently from Fenda, though. Instead, it’s sort of like a VIP, voice-enabled version of the Ask Me Anything (AMA) Q&A format popularized by Reddit. Zhihu schedules a celebrity to answer questions during a certain time, and then during that time users who pay a fee can submit written questions into a feed and the celebrity responds with voice-recorded answers in the same feed, sort of like a live group chat you have to pay to get into.

It was a bit like a virtual business seminar, complete with the Q&A section.

The whole experience is quite different, since on Fenda you might follow a celeb and pay US$0.15 to get one new answer each day, whereas on Zhihu Live you’d pay more to hear your favorite celeb answer a flurry of questions all at once – but you might have to wait weeks or months for Zhihu to book the right person. So far, Zhihu has gotten some impressive guests (including Innovation Works founder and investor Kaifu Lee), but overall Fenda’s roster is probably more impressive in terms of sheer star power.

Zhihu Live does have another feature that may be of interest to power users and people with serious questions, though. Some of its Live AMA-like events are focused on a particular theme. For example, a recent Q&A session with former VC and current entrepreneur (he’s a VP at Panda TV) was targeted at would-be entrepreneurs and helping them answer questions and fix problems with their business plans. It was, in other words, a bit like a virtual business seminar, complete with the Q&A section.

It’s hard to be sure how long Fenda, Zhihu Live, or the myriad similar startups that are probably being founded as I type this sentence, will be able to keep the growth trend in user spending growing. But there’s no denying that right now, the cash-for-answers trend is hot. How long will China’s net users be willing to pay already-rich people to hear their answers to questions both serious and silly? Your guess is as good as mine. But for the moment, if you’ve got cash to burn and questions you’d like to ask, China’s superstars are out there ready to answer.

This is a repost blog from Tech in Asia.

A Tech in Asia editor focused primarily on China, with special interest in public service, environmental, and video game tech. Follow me on Twitter as @ChinaGeeks.
Recommended Posts
Recent News
Sign Up For Our Newsletter